Campus Chaos – Why the Game I Love is Breaking My Heart 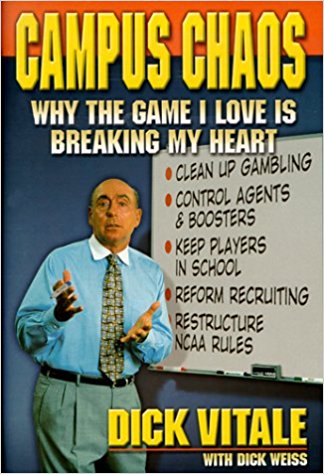 In his 20 seasons on ESPN and ABC, Dick Vitale has been synonymous with college basketball. Through his passion and devotion to the game, Vitale has earned an ever-growing following with an enthusiasm for the game, its players and coaches never before seen in television.
Having coached at the high school, collegiate and professional levels. Vitale brings an insider's perspective to each broadcast, and his lifelong relationships with the administrators, coaches and players provide him a wealth of knowledge few can equal.

Behind every "get a TO, baby" and the "slam, jam, bam" resides in Vitale a growing concern for the sport that reels when yet another misguided underclassman announces he's going pro or a new recruiting or academic scandal arises. As much as Vitale is a fan courtside, he's also a champion of the game away from it, spending countless hours lobbying for rules changes or talking with athletic directors about ways to improve the game.

Being so close to the sport, Vitale is infinitely aware of the big-business pressures that affect it today, from the billions of dollars spent by television networks to the controversy surrounding the entrance exam requirements.

And having played and coached basketball, he truly cares about the kids and knows that the success of the sport rides on the shoulders of those student-athletes who proudly wear their school colors into battle.

Here are Vitale's heartfelt thoughts on how to halt the off-court technical fouls of the sport he loves so deeply.

In short, discusses the following: