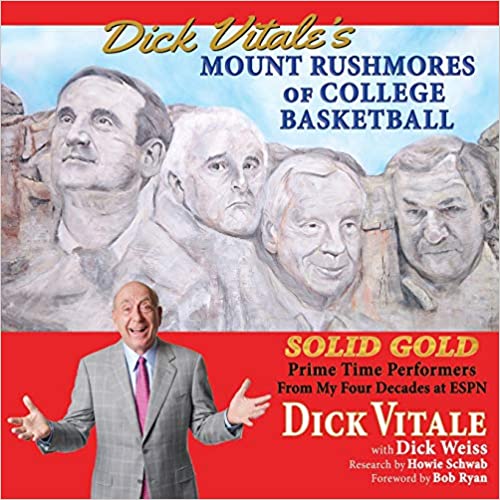 One day, I was sitting with a bunch of my buddies and, as usual, the conversation was all about sports. We began to battle back and forth about whether anyone would supplant Michael Jordan as the greatest of all time in the world of basketball. It has been generally felt by many experts that Jordan has not had anyone equal his stature. The fun began as I said, wait a minute, what about King James, LeBron James!
Then the battle began.
Names came flying out, fast and furious. Jordan and LeBron, Bill Russell, Wilt Chamberlain, Elgin Baylor, Jerry West, The Big O, Larry Legend, Magic Johnson. The hits just kept on coming. It was an intense back-and-forth, baby!
Well, that gave me an incredible idea. I went to bed that night, tossing and turning, thinking about picking the best of the best in my four decades behind the microphone at ESPN.
Then I simply said, I will call it my Mount Rushmores, the best four in various categories, Yes, the best coaches, players, etc. I think you get the picture.
I enlisted the help of Hall of Fame writer Dick "Hoops" Weiss and former ESPN research guru Howie Schwab to help come up with categories for our All Mount Rushmore teams. Together we developed this concept and I put together my lists for each group.
My friends, let the debates begin. I know you can make a case for different people in several categories. That's the fun part, like being at a sports bar and debating who you liked more.
I could have gone with a number of people for coaching and playing honors. At the end, I made some tough decisions.
I do want to be very clear that all of my Mount Rushmore players and coaches are only from my era at ESPN, which began on December 5, 1979, when I worked the very first major college basketball game on ESPN, which was between De Paul (Number One in the Nation!) vs. Wisconsin. That is the only reason I did not include greats like Magic Johnson, Larry Bird, and the legendary John Wooden. They were just before my time at ESPN. I have the utmost respect and admiration for those guys!
I hope you enjoy my latest book. It was a lot of fun putting these All-Mount Rushmore teams together.

As with most of my projects, this book is really special to me because all of my proceeds from the sale of it will go to the V Foundation for pediatric cancer research. Please spread the word, as we must all unite to help kids battling cancer.I would appreciate it so much if you would make a donation by telling friends about this book and by going to: www.dickvitaleonline.com. All donations will go through the V Foundation for Cancer Research.