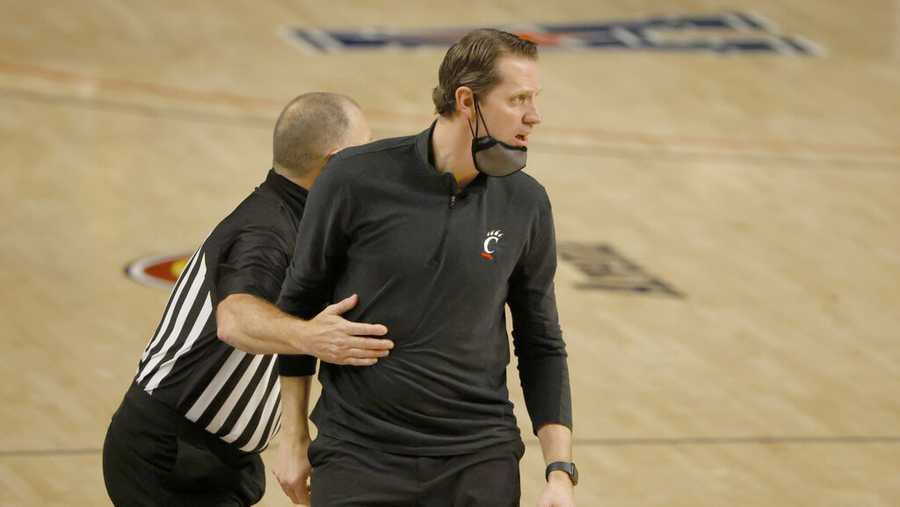 UC AD John Cunningham made the official announcement, indicating Tim Morris would serve as interim coach until a national search could be completed to find an heir to the Bearcat throne.

I first met Brannen when he took the job after Mick Cronin departed to become head coach at UCLA and he seemed like a nice guy who been successful in transitioning Northern Kentucky from Division II to Division I and won the Horizon League tournament earning the Norse an invitation to the Big Dance. I never heard of any problems when he played for Billy Donovan at Marshall or when he worked as an assistant coach for the Anthony Solomon at St. Bonaventure or Anthony Grant at VCU and Alabama. But for a program that has ascended college basketball’s highest peaks over the years under achieved during his two years on the bridge in the eyes of passionate UC fans who yearn for the likes of Oscar Roberstson, Nick Van Exel, and Lance Stephenson to play for the Bearcats in the Fifth Third Arena, and now six players entered the transfer portal this spring. Cunningham said the university was acting in best interest of its student athletes and the institution, although he would not get into the specifics.

The Athletic previously reported a rift between Brannen and his players led to the mass roster exodus. Since Brannen was hired, seven players recruited by Brannen have left the program and only two of seven Bearcats addition made before the 2020-21 season remain on the roster. Even during the team’s late run to the American title game, issues had been reportedly percolating inside the locker room.

“It was hard,’’ one player told the Athletic. “To the point where, at some points during the season, I kind of didn’t love the game. It wasn’t fun anymore. I lost the love of the game. And I feel like that’s all because of coach Brannen. That’s just being honest. It’s not the teammates, not the fans. It was never about that. It was about one guy.’’

The decision to terminate Brannen comes two weeks after Cunningham said the university was reviewing unspecified allegations related to the program after the mass exodus. On April 3, Brannen was placed on administrative leave pending the outcome of the internal review.

“I’m no stranger to disputes between universities and head coaches and complaints of mistreatment by student athletes,’’ Mars told the Enquirer. “In fact, I’ve probably helped more college athletes transfer or those reasons than any lawyer in the country. But I’ve never encountered anything like what’s been going on inside the UC athletics department.’’

Mars went on to pass along an April 3 text from UC football coach Luke Fickell to Brannen, saying, in part, “This is bull**** and the way it’s being handled is bull**** as well.’’

Brannen coached the Bearcats to a 20-10 record in 2019-20, a tie for the AAC regular season title and the No. 1 seed in the AAC tournament. The post season conference tournaments were canceled due to the Coronavirus pandemic. Cincinnati started the 2020-21 season 3-7 before Covid issues forced the team away from the court for 25 days. The Bearcats rallied to a 9-4 finish and reach the AAC tournament championship game and was dismantled by the regular season champion Houston Cougars who were enjoying their moment in the sun enroute to the second Sweet Sixteen appearance under Kelvlin Sampson and first trip to the Final Four since Phi Slamma Jamma dominated opponents in 1984 . The Bearcats finished 12-11 and failed to make the tournament for the first time since 2010.

The mass exodus of players began three days after the loss in the championship to Houston. And Brannen found himself a man without a country. He wasn’t hired by Cunningham, who presvioulsy worked at Minnesota and Syracuse and had no family ties to either Huggins or Cronin, no ground swell of local support when he needed it, and wasn’t perceived to be the same caliber coach as Kelvin Sampson or Penny Hardaway employed by other AAC members. He also didn’t have enough success to suit the fan base, finishing 31-21 in two years and who watched conference rivals advance through March Madness as they reminisced about five stright trips to the Final Four and back to back national champions when Ed Jucker was coach.

With Brannen dismissed, Cunningham now can pick his own man. Early speculation has centered on South Carolina coach Frank Martin, former Indiana coach Archie Miller and even former UC player and current Huggins’ assistant coach Erik Martin. But there will be a long legal battle that figures to get ugly before the dust settles.